i.e. how to imagine ourselves in twenty years and think of the first steps we can take today 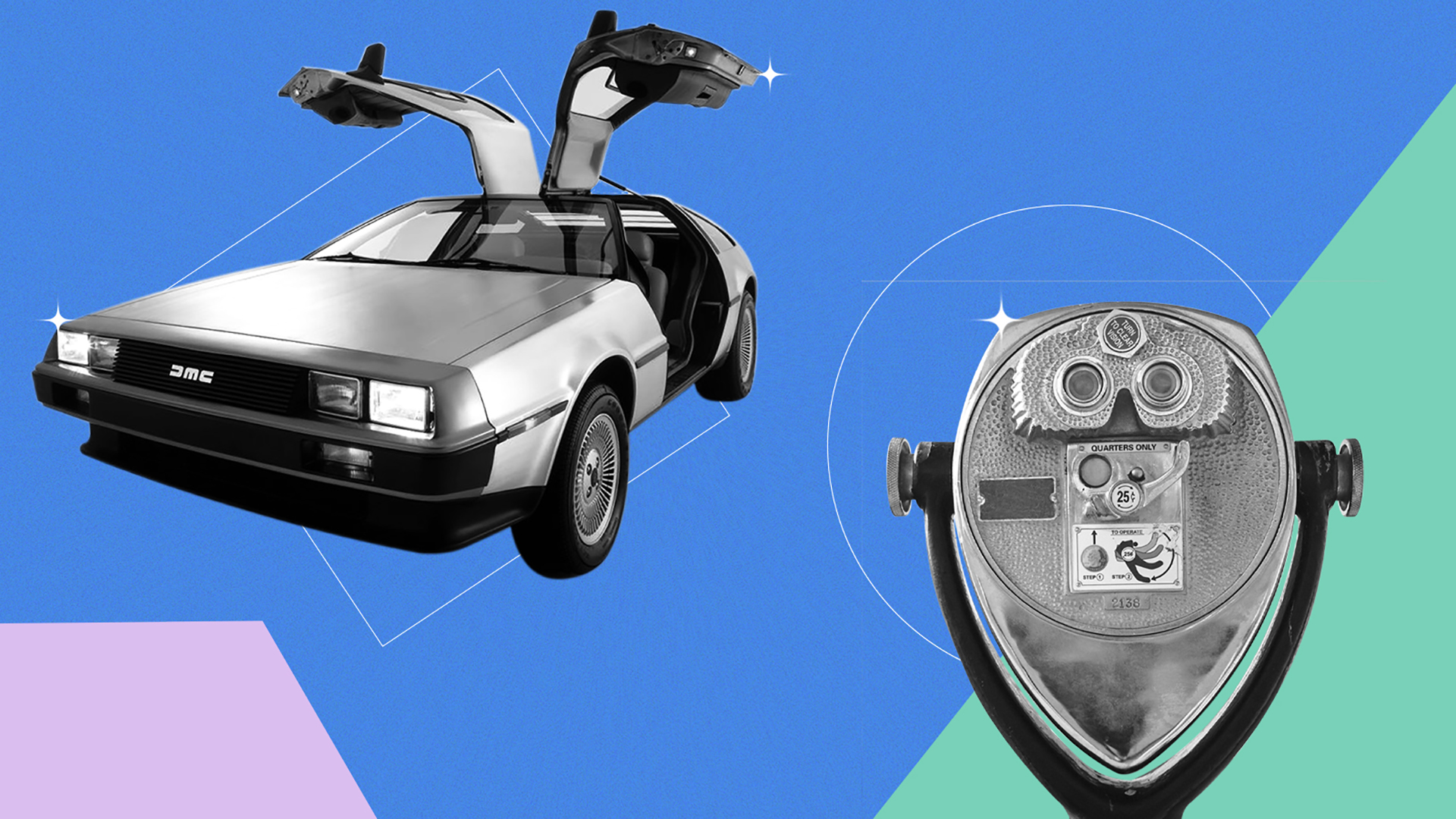 Flash back to 1998. Robert Zemeckis and Bob Gale, respectively director and screenwriter for “Back To The Future Part II,” sit in a roundtable to imagine how the future would have been, as many of the scenes of the movie they are producing are set in 2015.

Beyond the usual flying, automated cars seen in virtually every science fiction movie of the time, the two imagine a world where sneakers and one-size clothes automatically adjust to the person wearing them, engines are fueled by recycled stuff, food cooks in seconds, and intrusive ads like holograms and 3D videos constantly get in the way of every citizen’s life.

The result is astonishing. Beyond the success at the box office, “Back To The Future Part II” still stands today thanks to the way it envisioned reality in such an accurate way. So many of the things the movie speculated on have either become real things or prototypes close to seeing the light of day.

What would happen, though, if we tried to do the same thing today, picturing the year 2040? Would we be able to get close to the actual future reality by simply using our imagination?

For Zemeckis and Gale, it mostly came down to a (very well-executed) exercise in style, which helped them create something fictional. But can we use that same method — or something close to it — to glimpse at the future of the industry we are working in? Perhaps even that of our own company? 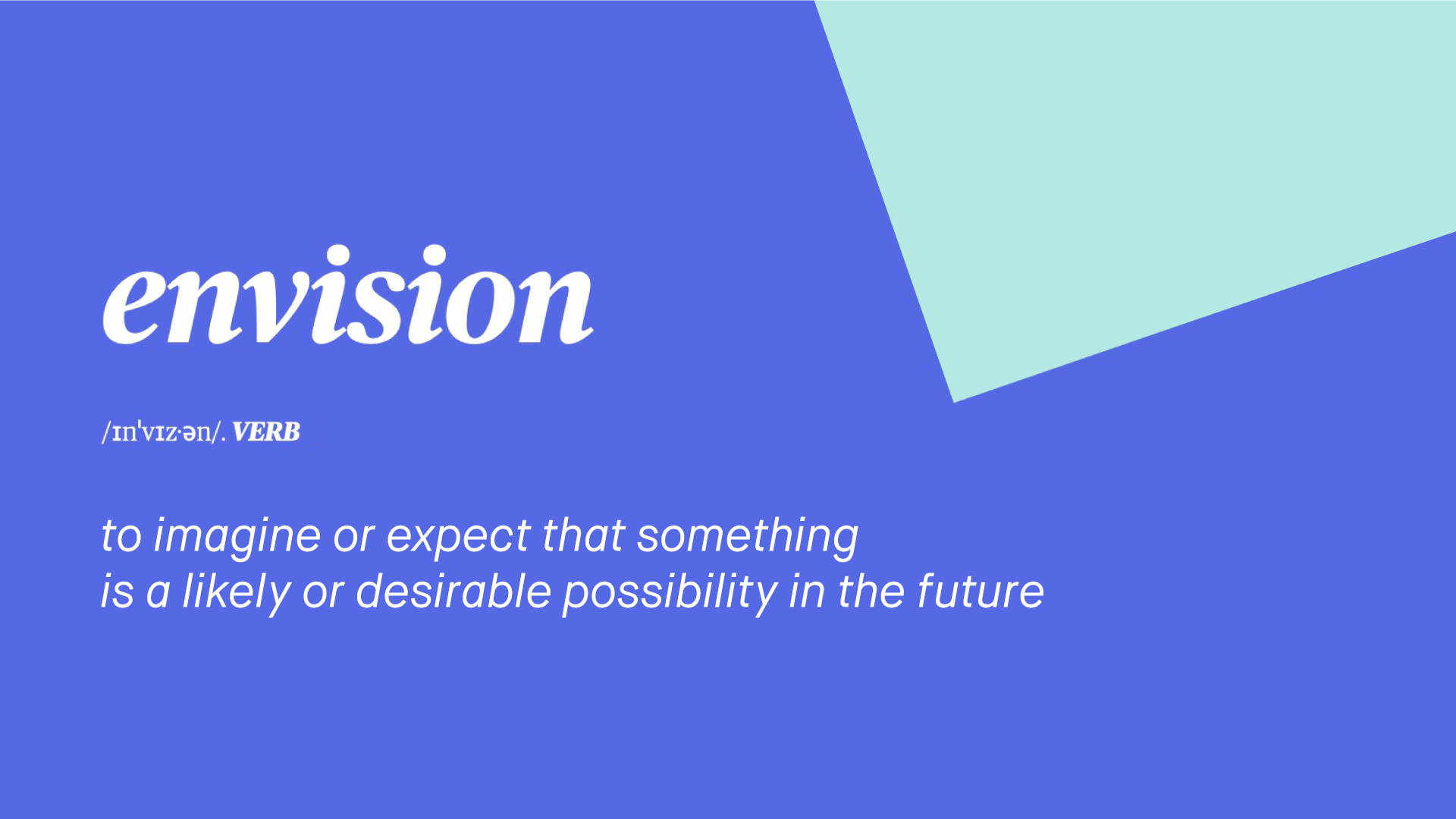 Why it’s important to think about it this way

To take what is effectively a quantum leap, even being a visionary may not be enough. Creative thinking and a vivid imagination are crucial, but not sufficient. It thus becomes paramount to intercept and understand those “contemporary signals,” called phenomena, that can help us make sense of the yet-indistinct future we’re designing.

It is necessary to make up one’s mind, understand the phenomenon’s impact and the potential for change it brings to the current market and organizations. Our radars must be able to intercept these phenomena to catch hints about future changes — whether they’re closer or farther away; self-apparent or barely perceptible.

It is only by studying said signals that we can truly understand how powerful coming change can be. Social or cultural change; changes that involve the world of retail, or perhaps healthcare. A signal can be a peer-to-peer platform that creates a model to sell directly to consumers; a non-alcoholic beverage company that reinvents the aperitivo ritual; surveys that show single people’s new habits; perhaps supply chain solutions that offer new ways to save money on certain materials when shipping packed goods.

It’s not just a reckless gamble, then, but a point of view that needs to be created through a carefully designed path that lives between the decoding of the signal and the interpretation of change.

These signals help us build a hypothetical future scenario, inside of which we can imagine our organization moving towards places that would be hard to interpret today.

And while those signals may be hard to intercept (albeit being relatively well defined), what truly remains a mystery is the number of future scenarios, and thus the possible branching of transformation. Some scenarios may be closer in time, and therefore easier to imagine. Others may be genuinely unexpected.

In 1945, the acronym “G.U.B.U.” was used for the first time. It meant “Grotesque, Unbelievable, Bizarre,  and Unprecedented.” Despite slightly deviating from the original meaning, using G.U.B.U. as a reference can be enormously helpful and a source of inspiration to think outside the box of the daily grind.

Let’s take globalization as an example. For years, this word has been on everyone’s lips, picturing a future where goods, people, and information could flow freely, without limitations or boundaries of any kind. It seemed like the only possible future for the world.

Instead, in classic G.U.B.U. style, we now see futures where nationalist, reactionary political parties see their consensus skyrocket, with agendas steering away from many of the principles of a free market. Or things like big supermarket chains, which have decided to turn around and “go local,” pushing for homegrown, farm-to-table products. You see the point. And whether these scenarios are positive or not, we still need to be able to visualize and consider them.

Some of the scenarios you will find yourselves thinking about will more directly relate to G.U.B.U.. However, they are the hardest ones to build, as they likely conceal some of the weaker signals — despite also being the ones that usually hide surprises and exciting challenges for companies.

Scenarios are usually classified in accordance with their likelihood. From the one closer in time, and thus more likely (probable) all the way to the furthest, and less reliably predictable (preferable), passing by a sensible middle ground (possible/plausible).

To distinguish between them, we used a categorization named 3P, which can be interpreted as such:

In this last case, the concept behind G.U.B.U. becomes helpful to imagine a scenario that may seem impossible today but opens up our horizon towards entirely new possibilities; something beneficial to come up with strategic questions, much like Zemeckis and Gale with “Back To The Future Part II.” 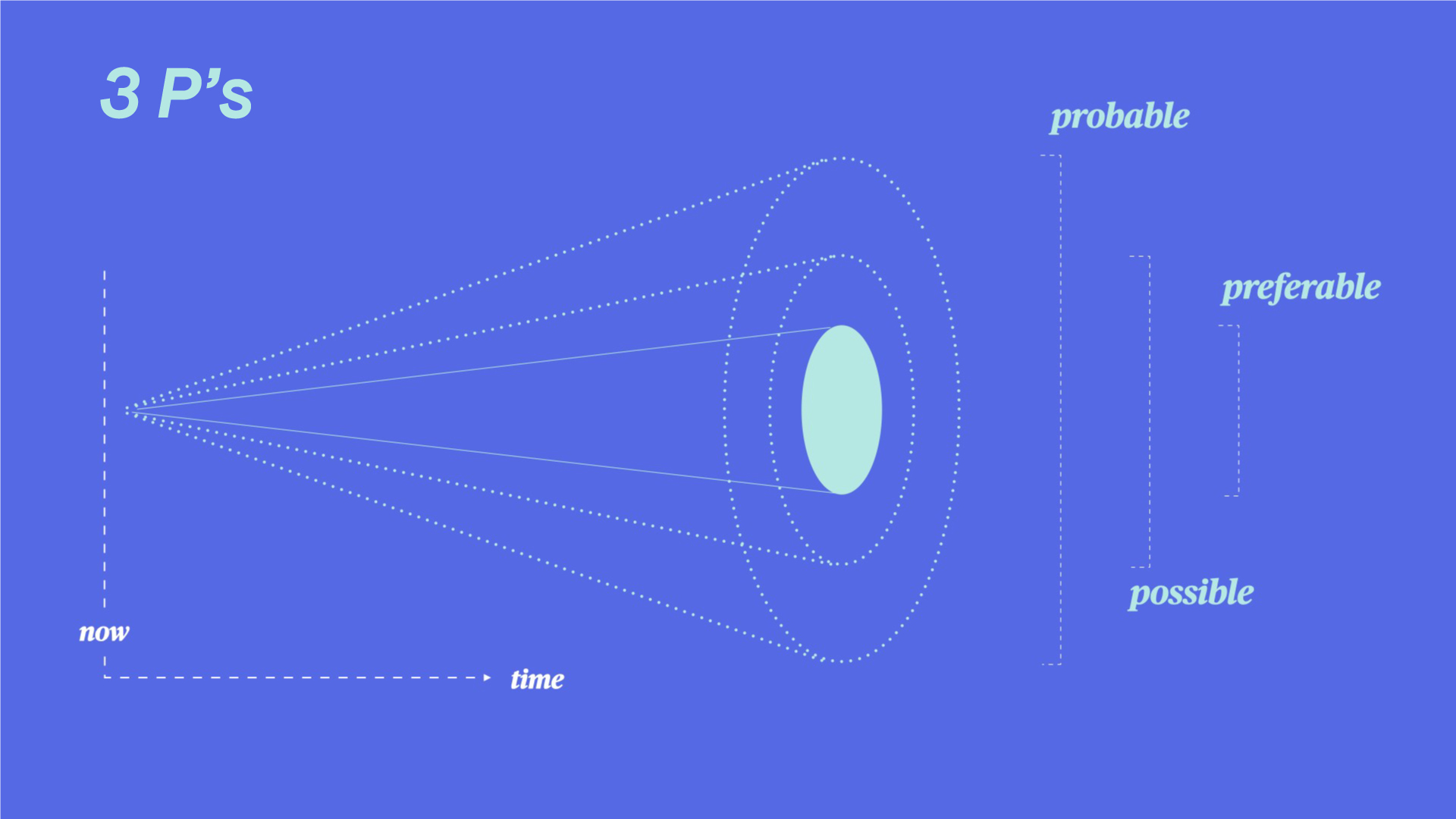 Why it makes sense to embark on this journey

For companies, it is extremely important to think of the journey in these terms — both startups seeking to enter a new market and market leaders who want to stay ahead of the curve and on top of the competition. Phenomena and subsequent changes (much like the weak signals that come before them) exist and will keep existing, somewhat democratically, for everyone.

But what are the reasons why a company should identify these elements that, apparently, are so far out in the future?

First of all, it’s helpful to be ready for a future whose borders are so blurred and undefined. For companies, it’s about taking a step beyond knowledge and acknowledgment of the future to an actual increase in the chance of success. With this modus cogitandi, we can be prepared for the future with a significant advantage, minimizing risk in the meantime.

Furthermore, when a desirable future has been identified, we can start asking ourselves critical questions to help us get there. For example, how will the workplace of the future look like? What will be the professional figures my company will need tomorrow? How will prospective customers get in touch with my brand? Where? And if it’s not possible to identify where, then how? Et cetera.

All these questions will then be useful to make strategic decisions, like changing the production of a specific product or evaluating the collaboration with a player that operates in a totally different market.

It’s not just about imagining, understanding, and managing one’s own future, but also creating it anew using the many foundational tools at our disposal. The final goal remains to choose the better road to go on and focus on making the imagined scenario happen. 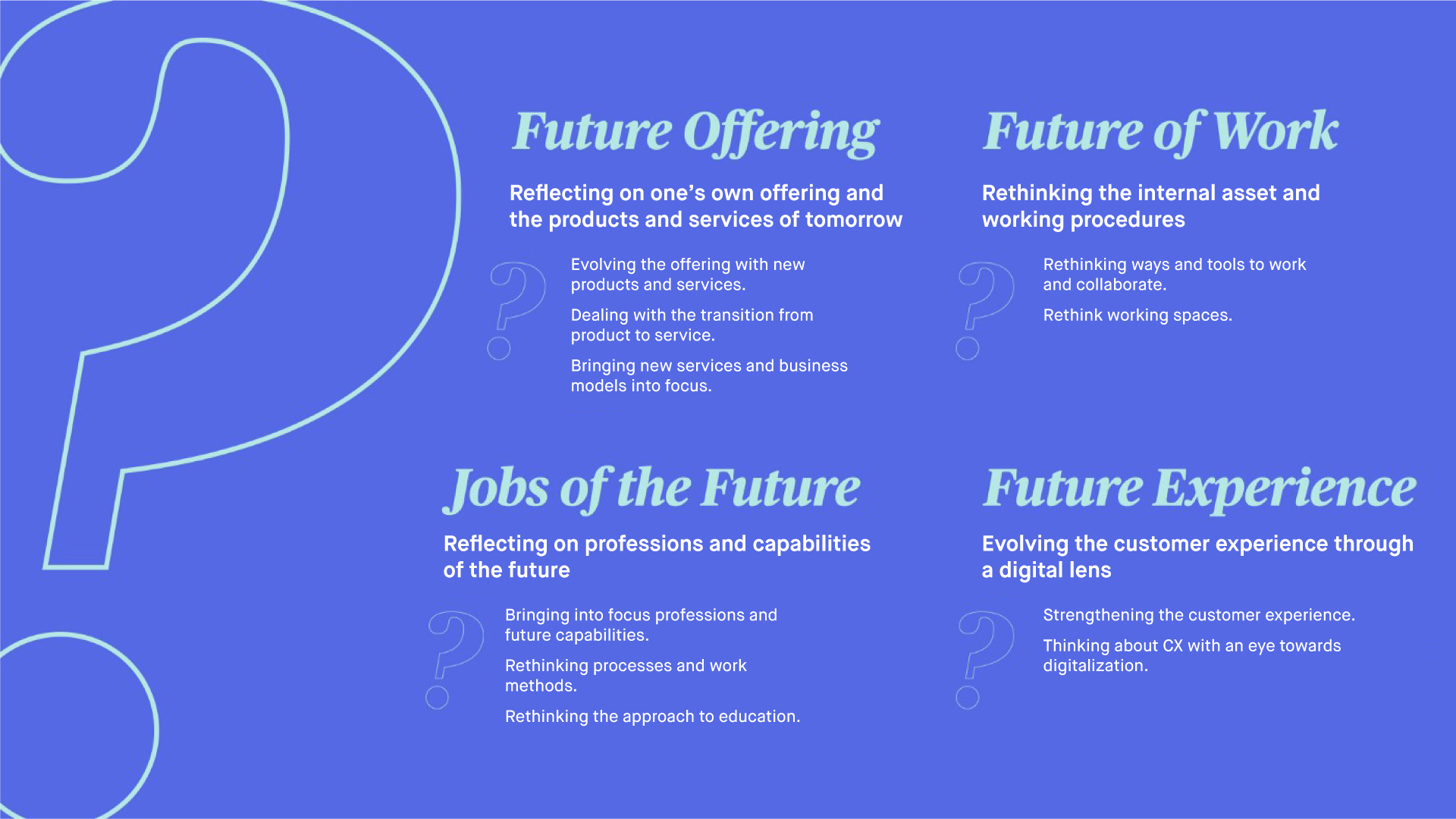 Some of the topics that companies face every day

How we do it at H-FARM

At H-FARM, we have gained a lot of experience in this field, developing projects for our clients that focus on the road toward change and the future. As we have seen, it is not an easy path to go on alone: these phenomena, from within a specific company or industry, are rather hard to intercept and translate into viable scenarios. Methodological support is necessary to both see and internalize those “signals of the future” that, more or less clearly, routinely surface.

Thanks to said experience, we have managed to draw a flexible path that can adapt to a client’s needs, and that is structured as such:

It’s a path that merges trend-driven innovation with co-design, where the organization’s knowledge plays a vital role in selecting the scenarios. In this way, identity and future vision come together to find both an interpretation of the future and, most importantly, a way to get there. It doesn’t matter how far into the future the envisioning projects (it could be a few months or twenty years), but its accuracy. And, with this forma mentis, it is possible to get there.

To learn more about our thoughts on future scenarios:

Elisa, Valentina, and Enrico have contributed to this article.